Having skipped out on the Goodwood Test this year (for a few reasons really – we hadn’t finished making anything yet, and Goodwood is a less important circuit to get right these days due to the relocation of the final), 2016 opened for weChook Racing with the season opener at Rockingham.

For those that don’t know, the Season Opener has traditionally consisted of an extended test session in the morning (over three hours this year) followed by two F24 format races in the afternoon. This means an 80 minute race with 2 mandatory driver changes – a slight problem for us!

We’d been pretty lazy in the off season – 2galoo had been put in storage after the 2015 International Final, and had barely been touched since. We did a few quick checks on Tuesday evening (we pumped up the tyres!) before tossing it on the roof and strapping it down.

We drove to Rockingham on Wednesday morning, and after bumping into everyone’s favourite commentator on the road, we arrived just in time to join the start of the scruiteneering queue. 2galoo flew through the checks – including the new impact foam regulations that had caught out a number of teams at the Goodwood test –  and received its MOT sticker, giving us plenty of time to get out on circuit. 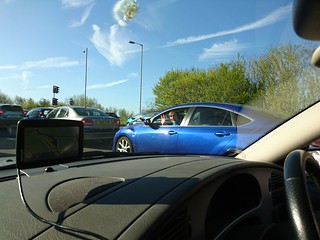 We had two major objectives for the test – the first was to try out the eChook Nano (read about it here), the bluetooth data logging and telemetry system that we have co-developed with Driven. Our second objective was to extend our understanding on how to use our gearing to maximise race efficiency.

We hit the circuit early in the session and completed 12 laps. Ian drove the first few laps in ‘constant current’ control mode, using the gearing to keep the current as close as possible to 25 Amps. Afterwards, we switched the strategy to run consecutive laps in each gear. The eChook worked admirably, until the phone used to log the collected data fell off the dash into the depths of the car and dropped its connection. 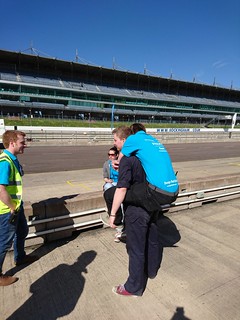 After completing the first planned stint, Ian bought the car back in for a few checks – we were particularly interested in the motor temperature after running a few laps in high gears with high current consumption. Thankfully, the temperature weren’t too high, although this doesn’t mean it wouldn’t start cooking if we ran a whole race at those speeds!

Having realised we weren’t collecting any data from the first stint, we decided to send the car back out in the last 30 minutes of the session. A quick battery change later, and 2galoo was back out on circuit, fitting in another 10 laps. I’ll be writing a separate blog post on the data we collected later on. 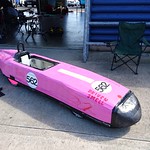 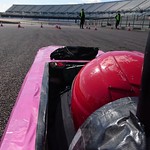 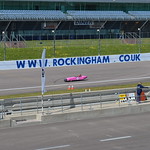 After a quick break, it was time for the first of the season opening races. As alluded – we had didn’t have enough drivers to actually compete in an F24 format event, so we used the race as another test session. We followed a similar pattern as we did in the morning, a few constant current laps followed by a lap in each of the gears. This consumed far more current than we would normally do during a race, so Ian retired the car after about 50 minutes and 16 laps when the voltage got a bit low, in order to protect our best set of batteries. We matched the fastest lap that we achieved during the international final weekend and had got up up to 2nd place at one point.

After the first race we’d done all of the testing we needed to do, and collected a lot of good data, so we elected not to run in the second race. We had a great day overall, the weather was great and 2galoo ran smoothly and reliably – a fitting sign off after what is likely to be the car’s final event.

This feels like a return to normality after the end of the 2015 season – Congratulations to Dave (and the newly extended Cullimore Racing team) for a pair of victories – Jet II really is the real deal and the design work that has gone into it is the inspiration behind what we’re doing with 3galoo.

The newly arrived Bluebird looked highly impressive – I’m sure it will be a threat in whichever class it ends up entering! The rebranded Minion/ Scooby Too looked very impressive, and completed a whole lot of laps in practice. Probation IV showed up with a new and dapper set of orange bodywork, that looked just a bit like a boat. 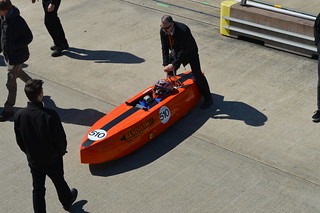 Thanks to the GP staff for another cracking event! We’re looking forward to the next race, and to joining them at STEMtech in June.

Now we just need to finish 3galoo before the Goodwood heat!