Shockingly, Rockingham did not begin with the customary camping trip. Being just over an hour’s drive away from weCHOOK Racing HQ, and a midweek event, we took the hit and left off early at 6:30, to try and miss some of the traffic on the M1. We weren’t all that successful.

We arrived to find plenty of teams already in attendance. A lot of the big players were there for the heat – Jet, 2 cars from Renishaw, 2 cars from Silesian, 2 cars from Reel Racing (from the top of Scotland), 2 cars from Driven, 2 cars (but no Dylan) from Sandbach, and Rotary Racer. It wouldn’t surprise me if Rockingham will have been the most competitive F24+ heat of the year! There were also plenty of brand new or nearly new cars there, including us, Stealth, Perkins and Bournville College. 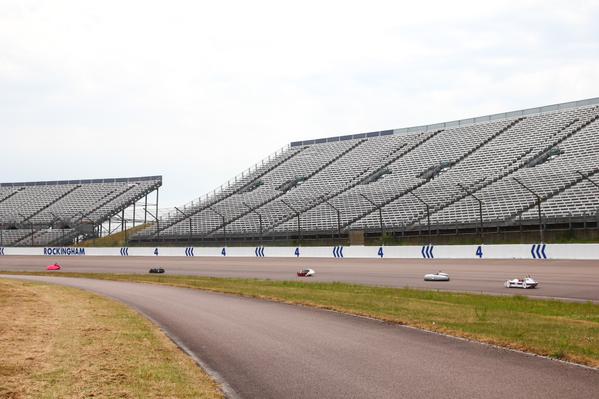 Some of our competitors at Rockingham

We ended were sharing a pit box with Reel Racing (who put us to shame when we were complaining about the distance we’d have to drive to get to Croft) and Bournville College, who were attending their first race, and had plenty of questions about Electric Boogaloo! One of the best things about these events is how open to talking about their cars (almost) everyone is, and its great to be able to talk about engineering on an equal footing with many of the kids involved. I’ll always consider it to be an educational engineering event first and a racing event second, so if I can learn something or help someone else to understand something I’ll count it as win, even if the car’s last out on circuit!

The Greenpower staff looked more stressed out than ever – with the massive number of teams in attendance, we experienced our first ever ‘dual scruiteneering’ thanks to Stewart. We got through quickly and with no rectifications to be made, leaving Ian and I plenty of time to talk strategy!

Rockingham was the first event to which we’d bought our full sensor set up. After spending Tuesday evening sorting out data typing issues, we had Motor Current, Motor RPM, and a very noisy Battery Voltage signal being transmitted wirelessly to the pitlane, displayed on screen to the driver, and (probably most importantly) logged to an SD card. There’s a few more sensors to be added (wheel RPM and motor temperature are the first two that come to mind), but the core of an idea that we had at the start of 2014 is now in place: All the necessary data collection (and tools to analyse it) to do 5 laps in practice, then come in and decide exactly how to use our gearing in the race.

The new sensor setup had a second purpose. We were still lacking in a really effective motor cooling solution – we had some PC fans blowing air over the motor case, but only a few small heat sinks attached to the shaft. Merryfield had seen the motor casing hit over 100 degrees, and we were keen to avoid doing this again, as it could well have ended the race. Seeing as we couldn’t get heat out of the motor very quickly, we had to manage the amount of heat that we were putting into it. Using the readout of current in the cockpit, Ian could use the gearing to control the current, attempting to maintain an average consumption of ~24 Amps, and not allowing peaks of over 30 Amps. 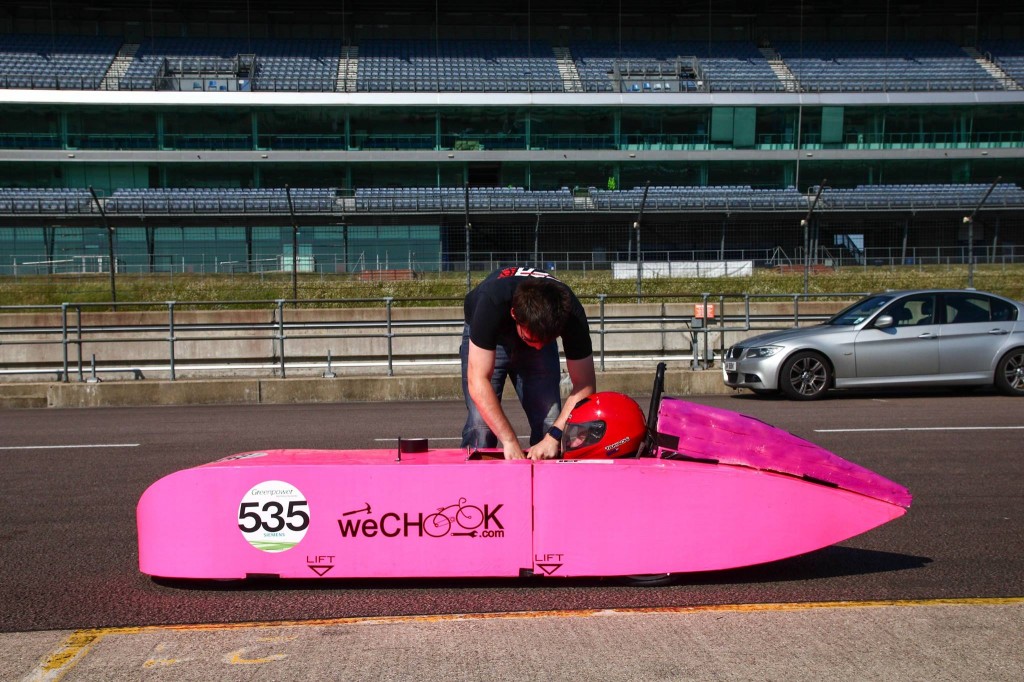 In the pits between practice sessions

The visible effect of this strategy was seeing the car blasting down the hill at near the speed of the top competitors, and then slowing right down on the way back up again. I’m tempted to break into pontification about ‘Constant Speed’ vs ‘Constant Current’ control, but I think I shall dedicate an entire post to that at a later date.

Having invested in a third pair of batteries after Merryfield, we had a bit of leeway for our testing in practice. We ended up running two stints, totally 16 laps. The first was to allow Ian to get used to using the gearing with the current sensors, and to get baseline on our power consumption. The car was behaving well, setting the highest speed lap that the car had achieved up until that point. Using the data collected in the first stint, we selected some areas of the circuit to deploy more power, and areas to conserve power. In this way, in the second stint we managed to increase speed by another 2 mph, without increasing total power consumption.

Having nailed down our strategy in practice, we did some final setup and waited for our race. We used to break to poke around some of the competitor’s cars, in particular investigating the maximum steering angle of Reprobation and Silesian’s Bullet cars. It became apparent from this just where we were losing out – both of them had a tiny frontal area compared to Electric Boogaloo. We also had an entertaining interview with Gav!

We lined up about halfway down the grid for the race, and got away relatively quickly. By the end of the first lap, we’d dropped down the field by a few positions, but we were keeping power consumption under control. As the race wore on, we began climbing back up the field, aided by both Stealth and Silesian’s Bullet II running out of power. in closing stages. We ended up just outside the points, but with the quality and quantity of the competition, this was a more impressive result than the 7th place finish at Merryfield. 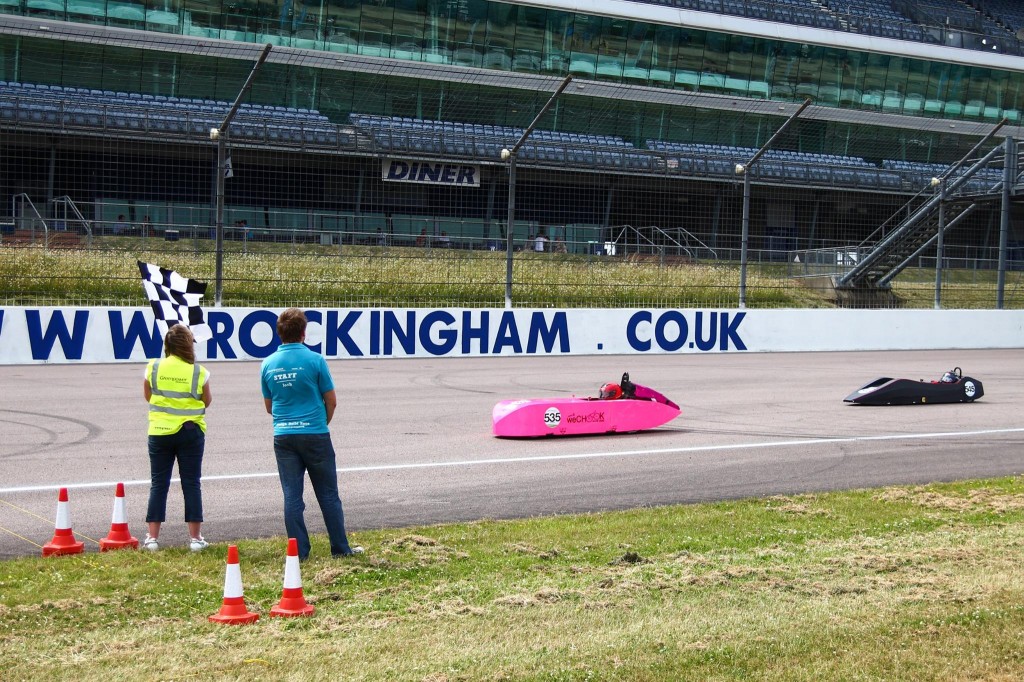 Just beating Stealth to the line!

We left the event with good confidence in the potential of the powertrain, but knowing that we’d never be truly competitive with car in its current form, due to its size. So, Rockingham turned out to Electric Boogaloo’s final race, and I should probably get back to finishing off the new car! 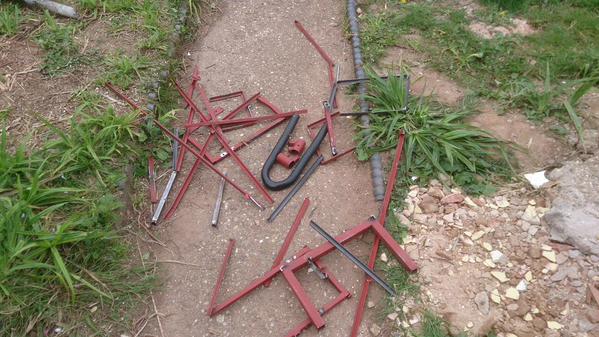