Day 2 started with a nice lie in. The car was pretty much ready .to roll, and with all the running on day 1, we had no real need to go out in practice, giving us plenty of time until 1 o’clock when the F24+ International Final & Corporate Challenge would start.

With the transponder fitted and the batteries nicely charged, we had a good look around the car for last minute improvements to be made – we ended up settling on redoing the tracking (again) and making wheel covers out of duct tape. On of the hardest things in Greenpower is quantifying improvements, but we think the wheel covers must have made a difference – despite being a longer race, our average speed in the F24+ Final was greater than it was in the lap race, and our fastest lap was 2 seconds quicker, despite using a lower amount of power per lap.

We used the ample spare time available to us to watch the F24 race – a particular highlight was Viper dashing of the line and overtaking the pace car before the exit of the first corner – I suspect that driver wasn’t really listening at the driver briefing. A cleverer strategy would have been to hang and get up to race speed over the last quarter of the formation lap, ensuring the race proper was started at top speed.

Seeing as we’re planning a new version of 2galoo’s bodywork before the 2016 season we  decided to give the current edition a bit of a send off, by giving it some additional decoration… with help from my sister who was visiting, and from some of the JLR guys as well. We’d like to hope that Gav appreciated our support! 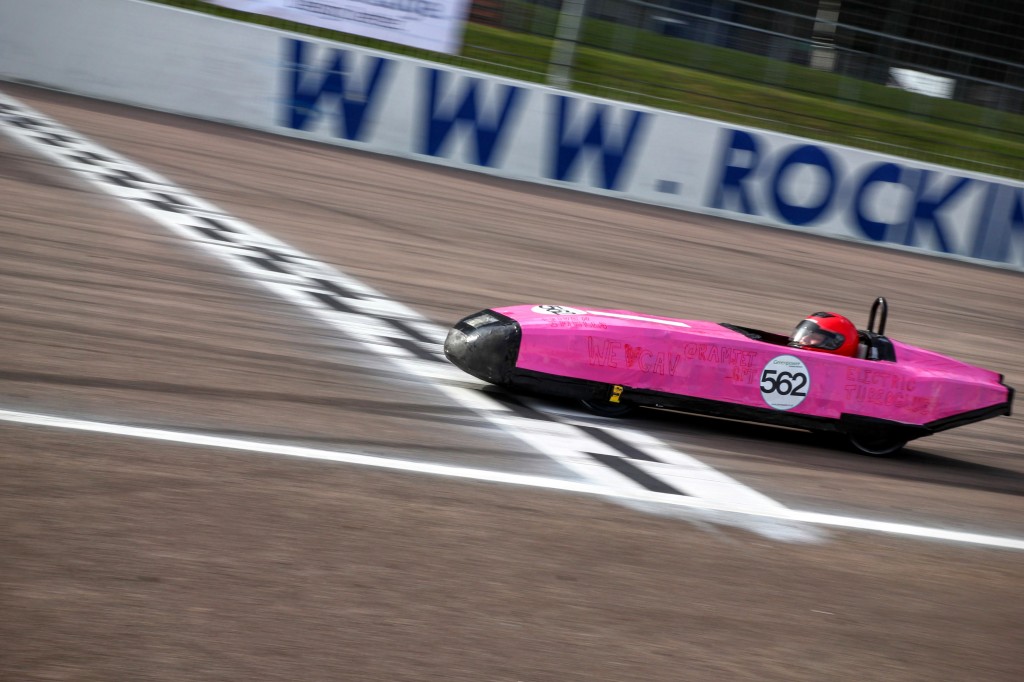 After another precarious trip up the banking, and a failed attempt to goad Dave Senior into a pushing race to the grid, we lined up in 6th place, behind Jet, Reprobation, F-eV, Bullet and Rotary Racer – all big names! After rather rudely snubbing Nash in our on grid interview (sorry again about that!), the grid was lined up and ready to go.

2galoo shot off the line when the flag dropped, just about reaching 2nd place before the first corner. When the car next came into view from the pit lane, it had been overtaken by Jet 1 and 2, along with Reprobation, and was in close formation with Rotary Racer. We managed to hold them off for the first 3rd of the race, but their lap times held strong when we hit the same mid race dip that we experienced in the Lap Race on day 1.

Probation and REC-349 had both dropped back a fair distance at the start of the race, but began to drag us back in in the last 15 minutes. With time for only 3 laps remaining, both of them caught and overtook Ian up the hill (we really need to look into some lightweighting for the driver) and began to pull away.

We crossed the line with only 4 seconds to spare before the flag dropped, which pushed us into the longest race that 2galoo had completed. It appears that Probation had pushed just a bit too hard to get ahead of us before the end, as its speed dropped significantly as the hour mark passed, and we retook the position – unfortunately REC-349 was just a bit too fast for us. 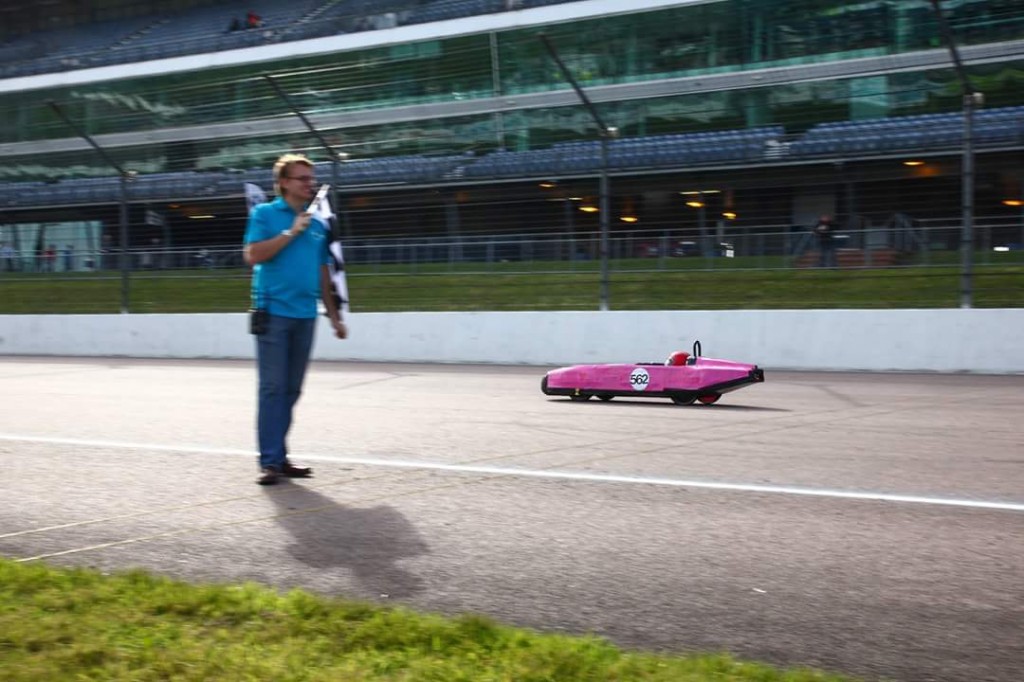 We finished the race in 11th place overall, and 9th of the cars competing in F24+ rather than the corporate challenge. It was a bit disappointing to finish outside of the points, but we were very happy with 2galoo’s performance, and had a lot of ideas on how to improve our performance for 2016 – both in the car and in race strategy. We also made some good contacts over the weekend, with whom we’re hoping to push on to greater success next season.

The F24+ championship concluded with Reprobation 2 points ahead of Jet, an almighty effort from the Renishaw team to beat a car that still looked untouchable at the start of this season. Driven bettered their previous best ever season performance by finishing the championship in 3rd place, just ahead of the two Bullet cars from Silesian.

Electric 2galoo finished the season in 8th place overall, just behind Minion and ahead of Project E. It was the 3rd highest place new car, and weCHOOK Racing was the highest place all new team. Thanks to building a new car mid season, we also managed to finish 25th with Electric Boogaloo!

Next stop: I’m not sure really…. Goodwood maybe? 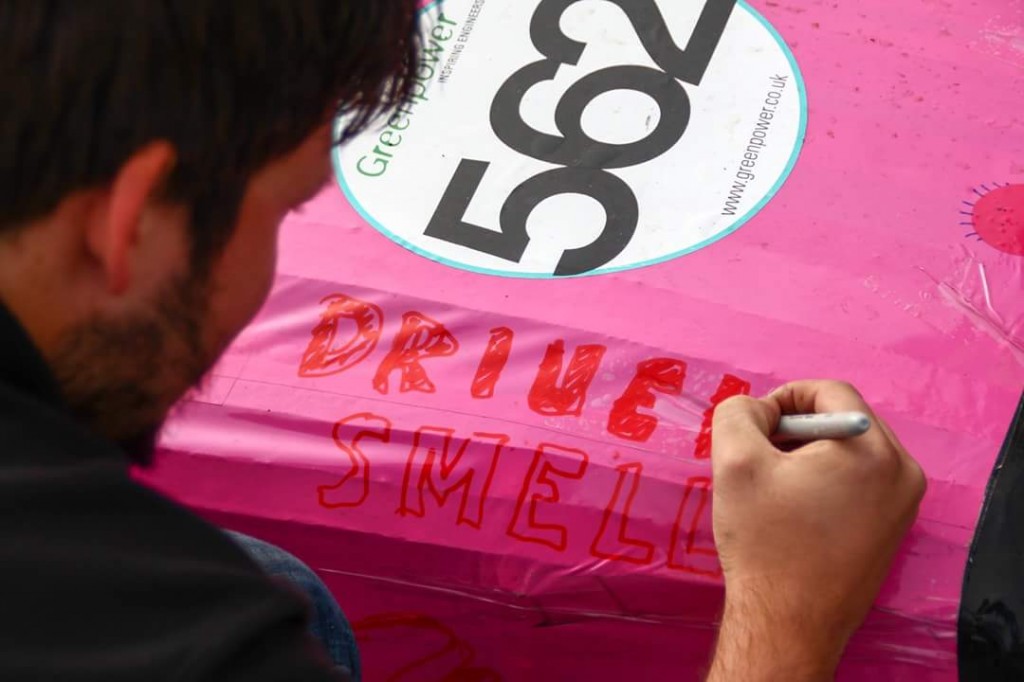