After testing two brand new Greenpower motors (https://wechook.com/?p=321) we borrowed the two motors that had been fitted to Project E and C-XeVolution for the last season.

We were aiming to determine how effective these motors were compared to the new pair and to each other.

Over the course of the season, the two motors fitted to C-XeVolution and Project E had both covered hundreds of miles, so we wanted to determine whether there had been a significant gain or loss of performance from the extensive run in. Unlike C-XeV’s motor, nether of this season’s motor’s has been significantly overheated, however the motor from C-XeVolution did get warm at Castle Combe and the International Final, due to the hills.

The used motors were tested using the same equipment as the new motors. This time, we decided not to attempt the highest current draw using the heated seat pads, as the results were not reliable enough. In order to test at the higher currents, its likely that we’ll have to add more bulbs. 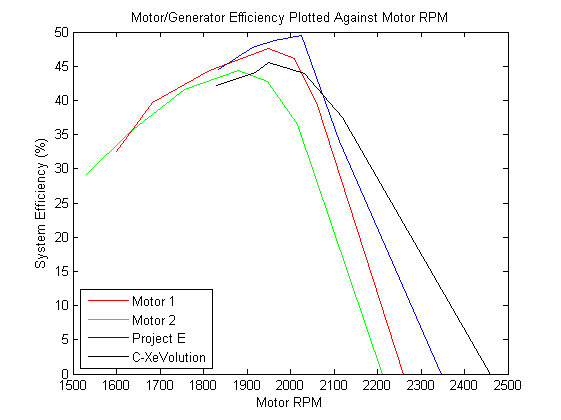 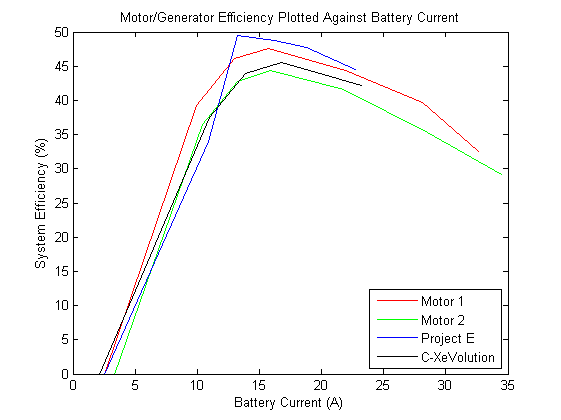 When plotting the motor’s efficiency against current, C-XeVolution’s motor is comparable to the second new motor, however it must run much more quickly in order to achieve this efficiency. Evolution’s motor’s performance appears to be tending towards that shown by C-XeV’s motor in the last test report, suggesting that the extra heat it experienced at Castle Combe and Goodwood may have started to cause some damage.

Project E’s motor also appears to need to run at a higher speed in order to achieve its peak efficiency, although it is more efficient than the first new motor over most of the tested speed range.

It suggests that, if we had managed to the run the motor at ~2000 RPM, rather than ~1700RPM, we would have been in a much more efficient range.

Further testing of the new motors after a more extensive run in will allow us to see how efficiency is affected by distance and thermal cycling. The motors will be cycled using a power supply to start with, and then run in anger once the rest of Ramjet is complete.

We also need to develop a more reliable method of testing the motor at higher duty, in order to better compare motors at the speeds they tend to experience during a race.