This came around quickly – it’s already the final heat of the 2015 season! It barely feels like last week that we started out building Electric Boogaloo, and here we are 7 races and a whole new car later, with only the International Final to go!

We managed a few tweaks to Electric 2galoo in the couple of days since Aintree – one of the wheels had a solarfilm cover added, along with a sharper knife edge at the tail of the car and some flaps to extend the bodywork down around the wheels. No massive improvements in pace were expected from these changes, but every little helps, and we hoped this would give us an idea what would help before the final.

Castle Combe is only 70 miles from home for us (and no one from Driven wanted to camp) so we set off early in the morning for the track. We ended up following a Citroen Saxo with a suspiciously large box on the roof, which turned out to be Nathaniel of Stealth Racing, who was also travelling to the track having recently started at university near to us. 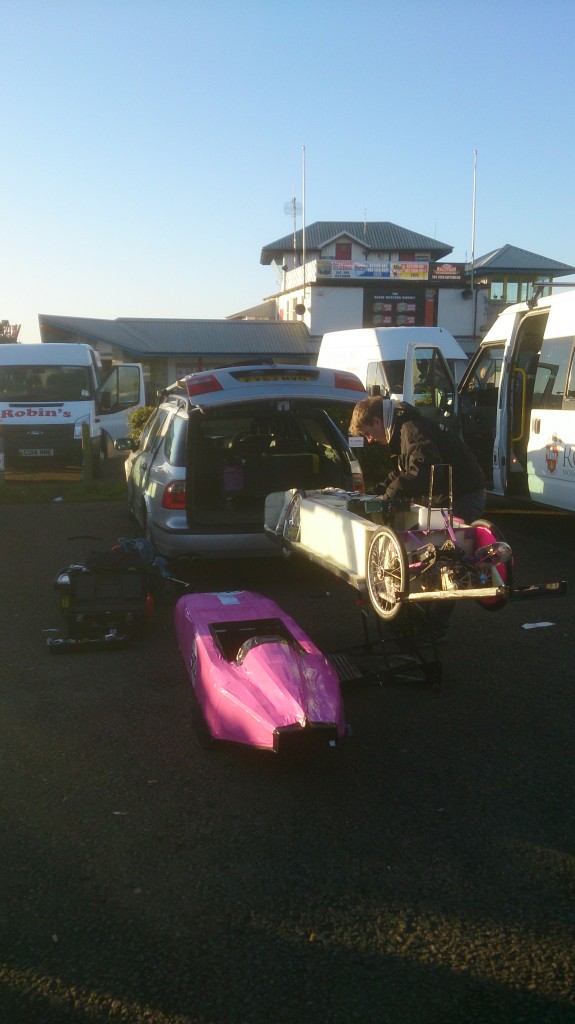 We did some faffing in the paddock, which meant that by the time we were ready, the scruiteneering queue was all the way around the car park. Thankfully, Josh gave us a bit of special treatment (I’m sure he was just looking for more things to get us to change before the final), giving us a bit of time to prep the car before practice.

As ever, practice proved to be stressful. Ian headed off onto the track, and never came back into view. I eventually got a report from the recovery driver that he had pulled off the circuit somewhere around the Esses, and was playing with something at the back of the car. 18 minutes after he left, Ian returned to the pit lane, with the news that there was a loose connection in the motor controller, that he had ‘fixed’ with some of the duct tape that was previously holding the body on.

Almost as soon as we headed back onto, the red flag came out for an incident that was out of view from the pit lane. 2galoo was the first car past once the red flag came out, and began drifting towards the marshall when applying the brakes heavily, due to a slight imbalance. Another trip to the pits followed to sort that problem, before we finally got a proper lap in. The batteries had taken a battering before we actually managed a timed lap, but we ended practice with the 6th fastest time.

In between practice and the race we made a few more tweaks – thankfully, we didn’t have to hunt down a welder this time. We could tell from the tyre wear that the front wheels were in need of tracking, and some more tape was needed, but otherwise the car seemed in fine fettle.

We spent the rest of the break investigating some of the new additions to the field; it was the first event for Jet II (Scramjet?), and everybody wants a look. It was pretty obviously only just finished – we wandered across as the cockpit opening was being cut into the bodywork, and the car was still covered in carbon dust when it was wheeled to the grid – and the team were playing down their chances, but we all had high expectations nonetheless! Jet II and Electric 2galoo are race numbers 561 and 562, so we would be starting next to each other on the grid!

Also in attendance was the heavily upgraded Stealth – with smaller wheels and a completely new set of bodywork, they were hoping for a similar step to that which we had over the summer break, if not more. The team is new to F24+, and I see I see big things if they stick with it.

The time for chatting quickly evaporated, so we installed our race batteries and set off for the grid. After a slight altercation with the recovery vehicle, which was coming the other way, we were the first in line to be wheeled out, which would have ensured us a first row start in the olden days… all it meant this race was that we were really in the way! It wasn’t too bad of a spot, we could admire Jet II (Turbojet?) whilst Sandbach to make their way to the track. 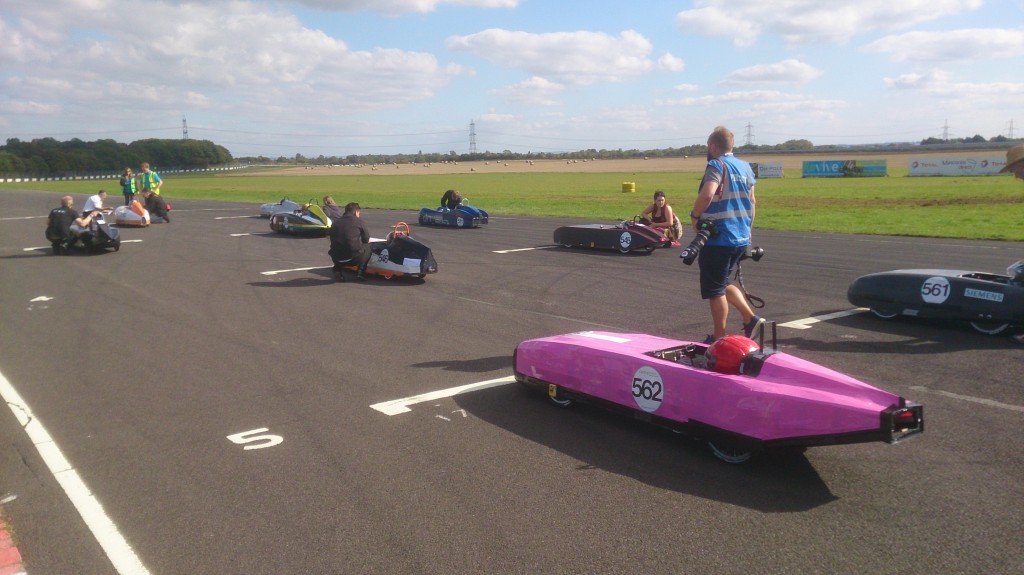 Eventually, the grid was formed, and we were ready to go racing! Ian got a lightning start, managing to pull up alongside F-eV, which started a couple of rows ahead, by the time the first corner was reached. 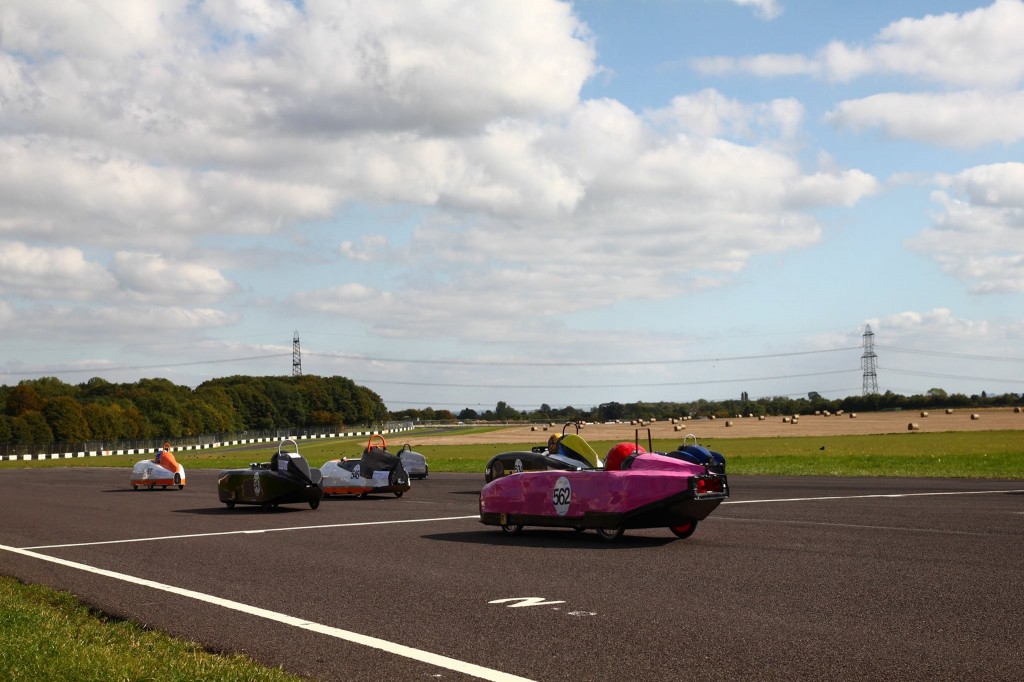 There was no settling into this race – Ian spent the first 40 minutes of the race of the race fighting for position with Stealth and REC-349, the ever improving car from the Renishaw apprentices. After changing position nearly every lap for three quarters of the race, Ian eventually began to pull away from Stealth; which was showing the first signs of battery degradation, and closing down the small buffer that REC-349 had built.

At this point I was a nervous wreck on the pit wall – I couldn’t tell if Ian was abusing the batteries too hard to race the cars around him, or whether he was taking it at our pace, and the cars around had been too aggressive. With 5 minutes of the race left, Ian unleashed the reserve amps, and increased speed to overhaul a 15 second gap and overtake REC-349 within a lap. It seemed he had power to spare, pulling out a 36 gap on the last lap of the race, as REC-349’s batteries dropped over the edge, having been pushed too hard trying to hold onto the position. We finished  in 5th – our original target position – in what we both agree was one of our best races yet, even if we weren’t fighting for a podium. 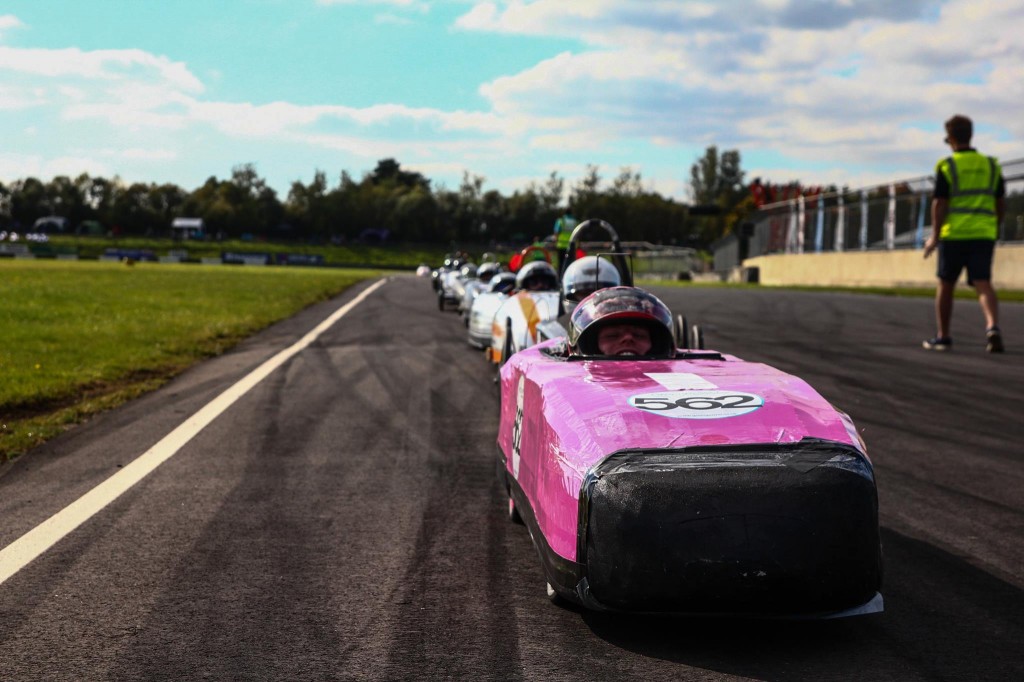 Elsewhere, Project E put in a cracking performance, with a massive improvement in pace since Aintree, beating us fair and square despite suffering a puncture on the last lap. F-eV suffered a ‘chain off’ early in the event, and used to opportunity to gear up significantly, presumably as a test for the high speeds expected at the International Final.

At the front, Reprobation took the win, but massive credit has to go to Cullimore Racing for taking a 2nd place only 10 seconds off the lead, with a car still missing most of its aerodynamic devices, and that had only performed a lone installation lap before the start of the race.

After the race, we had a quick pow-wow with some of the other F24+ competitors, before talking through our electronics and data logging package with the judges for the Siemen Digital Award. After all the nattering, it was only a few minutes until the prize giving ceremony, at which we were very happy to have been given the aforementioned award! I shall certainly endeavour to write a full blog post over the winter break on our telemetry, logging and data analysis methods, along with publishing some of our reports to give other teams an idea of what we’re doing.

Next Stop… The International Final at Rockingham 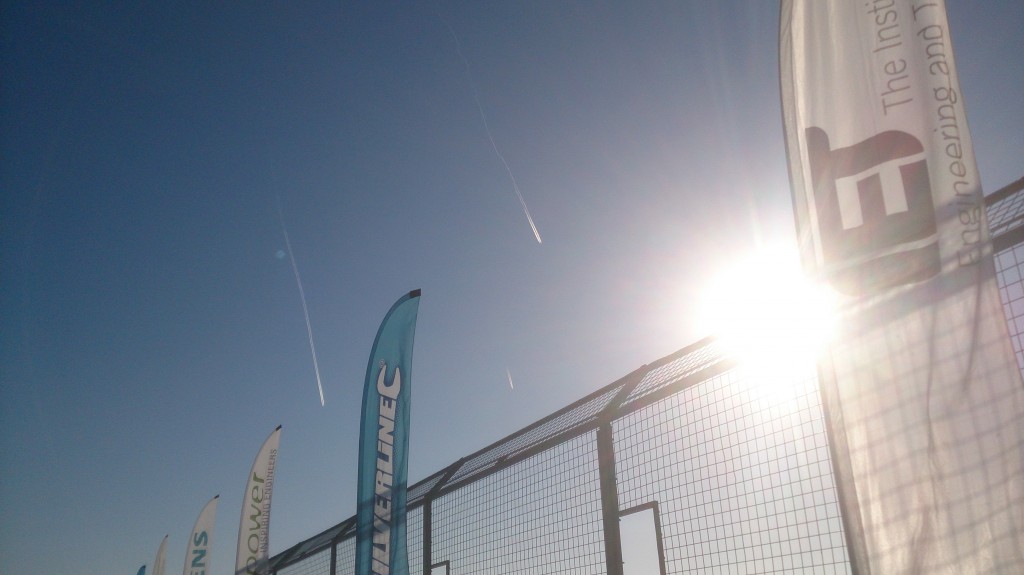 Greenpower even organised some good weather for us!