We set off soon after work on Tuesday, and hit a remarkably low amount of traffic on the way to the track. This time, we met Driven at the circuit, having been allowed to camp for the night within the track limits. After wolfing down a KFC and a beer, we hit the sack early to be well rested for the race day ahead. Camping at the circuit gave us a nice lie in as well!

We were woken up by the heavenly sound of a track sweeper – with many punctures in the last two races at Aintree, I was hopeful that this would make everyone’s race a bit safer. Our pit box was set up before 8:00 am, and through scruiteneering by 8:30 – our quickest ever start to the day, giving us plenty of time to get ready for practice. 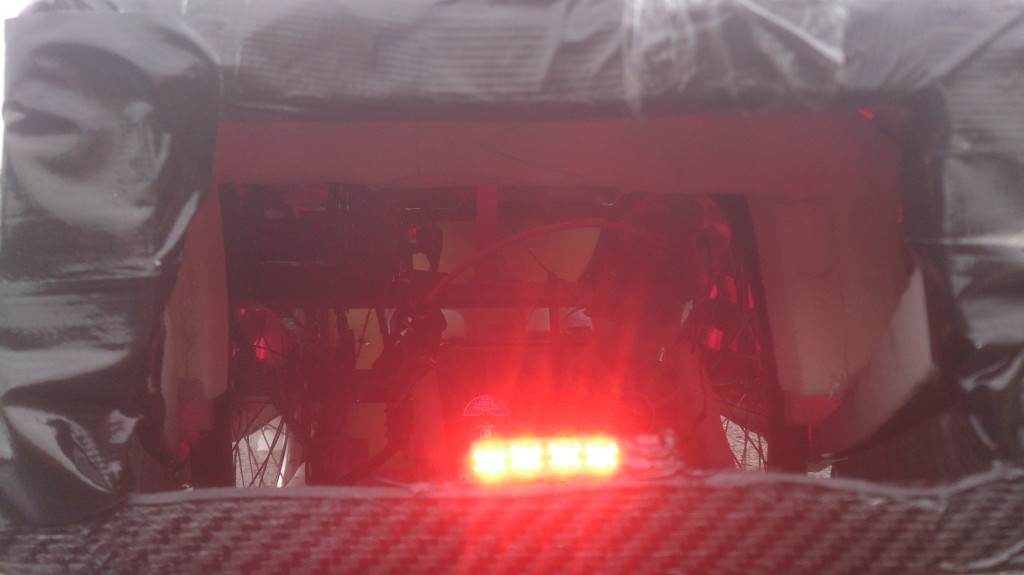 Looking at the competition, JLR were represented by Project E and F-eV, whilst Renishaw were represented by a comparatively small contingent – only Reprobation was in attendance. Cummins had a new car – Mach 1 – with a very tidy set of bodywork but little running time so far, and Sandbach had Dylan, their newest car, seemingly ready to roll. I would have liked to have had a closer look at Dylan – Sandback have come up with plenty of interesting ideas before, and I’m sure there are plenty on Dylan as well. I expect there’s still a bit of work to be done though, as it was beaten reasonably soundly by Dougal.

Sadly, there was no sign of Jet II this time around – we await Castle Combe with baited breath.

Practice started poorly for us. Ian completed 5 laps well off the pace, behind F-eV and Reprobation, which was to be expected, but also a long way behind Project E and Mach 1, both of which we were expecting to beat. Unfortunately, the 6th lap never came – 2galoo had pulled off to the side of the track with yet another steering failure.

This time around there was no panic – one of the marshalls pointed us towards a local garage, who quickly had the offending part welded back together. What’s more, we’d finally isolated the root cause of our problems. As long as we’re correct in our analysis, we don’t expect to see any repeats.

The car was reassembled and ready to go with an hour left before our race, so we used to opportunity to fraternise with the enemy –  we were particularly impressed with Cummins’ heat sink. After discussions with the team however, we had the impression that they would be running too hard in the race, and would likely run out of batteries well before the end. This was a valuable insight – we ended up behind them at the start of the race, but knew not to wreck our batteries in the first 20 minutes getting past them. 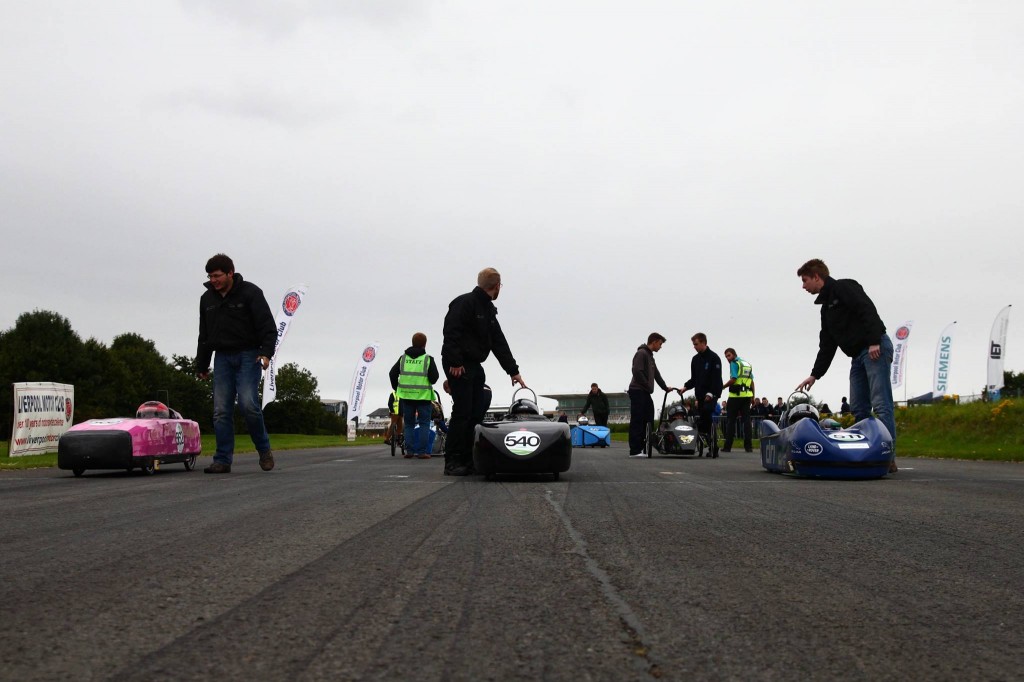 We lined up on the front row with F-eV and Project E, with Reprobation starting from the pit lane after detecting some bodywork rubbing. The start went well for us (despite a massive jump start from Project E) and we led into the first corner, where the cars went out of sight. Once they’d come back into view on the back straight, we were down in 5th place, behind the 4 cars that were ahead of us in practice, with only a few seconds between us and Mach 1. Fortunately, after the repairs, we’d gained about 20 seconds a lap, which put us right back in the mix.

With the long climb up the back straight, we’d agreed to take a conservative strategy, to we had the battery voltage left near the end of the race to pull ourselves up the hill. With this in mind, we sat behind Mach 1 for the first 5 laps, trying to extract a tow and managing our current. Cummins’ new car quickly began to drop of the pace, and we moved up to 4th. We immediately started to close on Project E, and were past a few laps later. 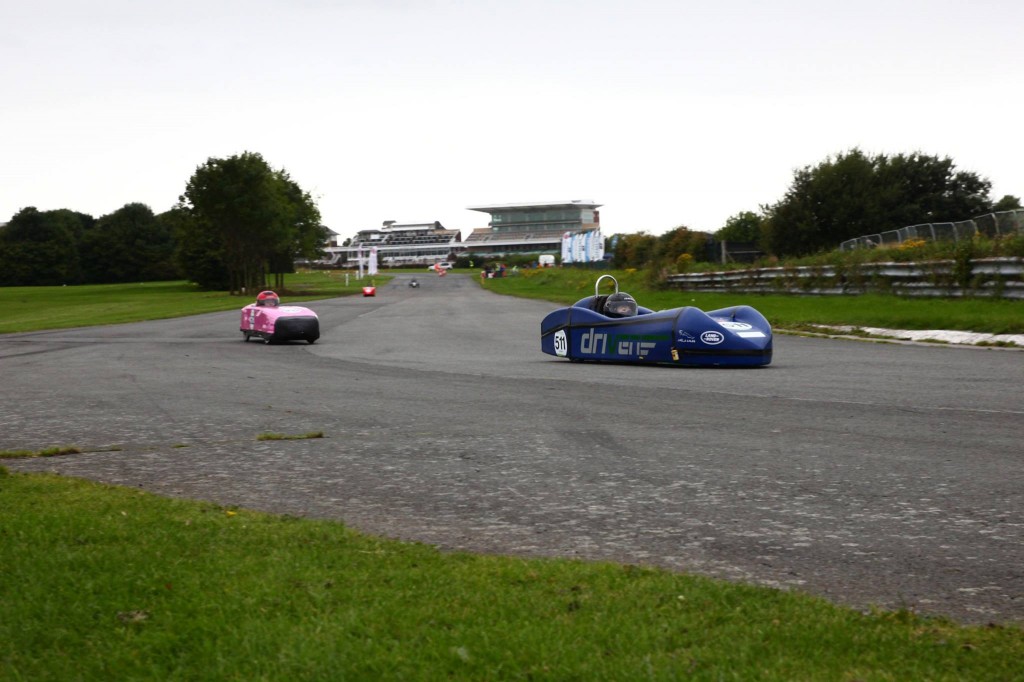 At that point, the race looked to be settled – Reprobation were pulling away from F-eV at a good rate, and F-eV was still pulling away from us about a second per lap, with neither car looking to run out of power any time soon – but as ever, Renishaw spiced things up. This time, Reprobation skipped a chain, just in sight off the pits on the back straight, but out of range for support.

Matt pulled off a heroic fix at the side of the track, and had the car running again 3 minutes later. By this point he was down in 4th place, but really put the hammer down – at one point he was 20 seconds a lap faster than anyone else out there – and had the lead back with a plenty of time left.

After that drama, we sat in 3rd place, reasonably unthreatened, but without much chance of catching F-eV ahead of us. We were happy to see the end of the race without issue – the championship points were very much appreciated. Maybe breaking steering components is a sign of good luck for us! 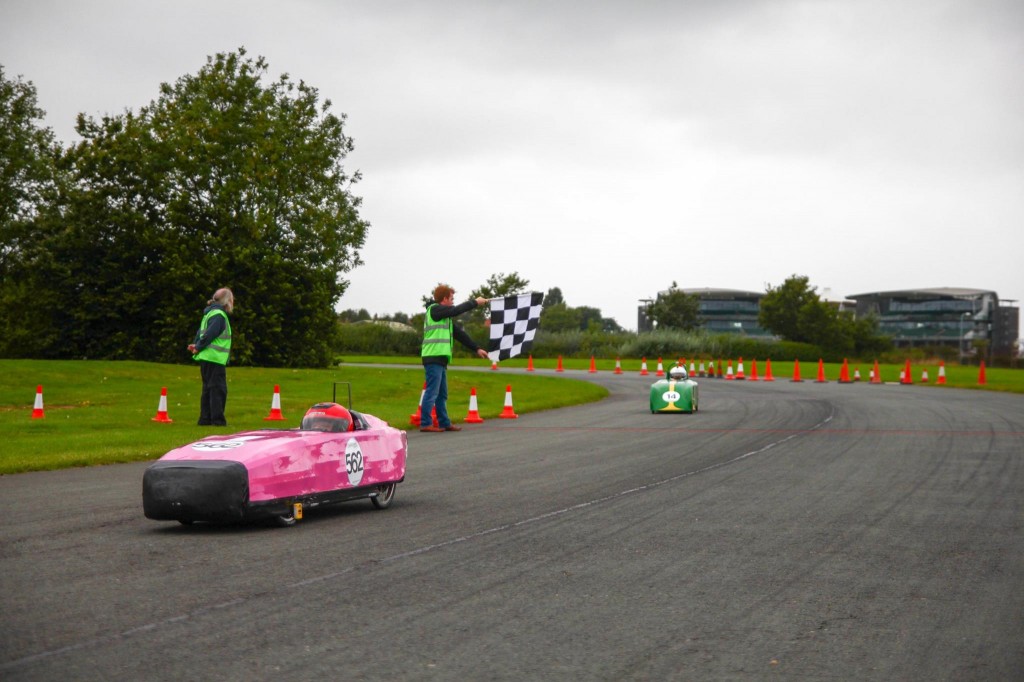 And across the line!

We were very pleased to receive the IET Engineering award for Electric 2galoo, it’s great to see that our version of engineering is just as appreciated as the heavily CAE influenced design ethos espoused by JLR and the like.

We’re off to Combe next, hope to see you there!