The first thing we decided upon for Electric 3galoo was a change to smaller diameter wheels – 16 inch rims down to 14 inch. The main reason we hadn’t done this previously were concerns over the cost and availability of tyres that fit this size rim, but after discussions with Matt from Renishaw (https://twitter.com/Hunter_Concepts) we decided to take the plunge.

The con of smaller wheels is higher rolling resistance. Rough calculations say that at F24+ speeds, aerodynamic drag exceeds rolling drag by at least a factor of 4, so it shouldn’t be too hard to get a win in the trade off.

As well as reducing the diameter of the wheel, we wanted to make them narrower. The widest point on Electric 2galoo is at the centre of the rear wheel, at 560mm. As well as being well over the minimum track width of 500mm, having the widest point on the car so close to the back is aerodynamically very disadvantageous – we found it impossible to make a smooth curve for the bodywork that came back to point, as seen on Reprobation and Jet.

In order to reduce this width we needed to forego spokes, replacing them with solid carbon disks. We’d also have to replace the standard bike hubs we’d used on our previous cars with something a bit more bespoke.

Our original design (made before we’d actually got our hands on the rims we planned to use) is shown in exploded view below. We planned to fit some foam cored carbon sandwich panels inside the rim, with a hub bonded and bolted around them. We would have had the same wheel design at the front and back of the car – the front wheels would have been bolted through in a similar fashion to 2galoo, whilst the rear wheels would be attached to a brake disc holder to enable driving/braking torque to be transferred to them. 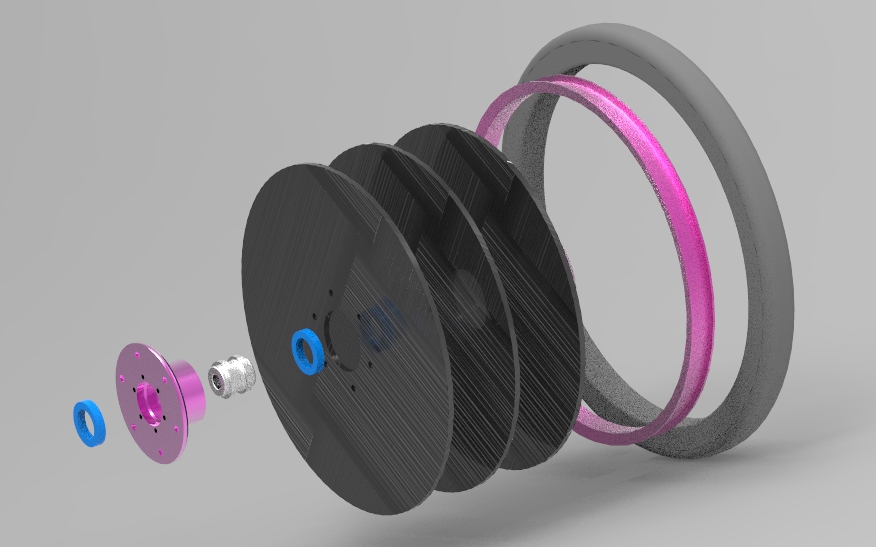 Once the rims arrived, we noticed a few problems with this design – the inside of the rim was angled, which would make it very difficult to get a good bonding surface between it and the carbon discs. The outer surface of the rim however was vertical,  making it a perfect bonding surface. This led to our second design iteration – instead of bolting the hub around the carbon discs, the discs would be attached around the hub. 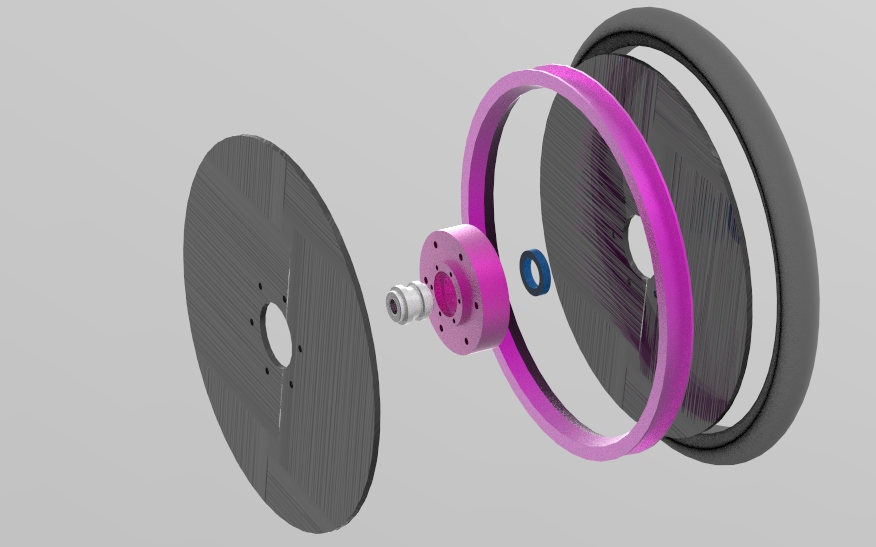 This reduced the complexity of the hub, reduced the number of parts we’d have to turn, and increased the bonding surface area on the rim, hopefully resulting in a stronger final product (in fact, my calculations say that each bond should be able to support 865kg – slightly more than we’re planning for 3galoo to weigh). This still allowed us to keep the front and rear wheels identical – a big benefit when it comes to keeping spares.

If anyone would like a closer look, the drawings for the first hub is here: Hub and the second is here: NewHub

Next up, the chassis!