After 10 weeks of solid work on the car (along with full time jobs, training, weddings, doing a house up and holidays), Electric 2galoo was ready for its first on track adventure. Due to the extremely condensed design and build period, testing had been incredibly limited, to the extent that the car hadn’t turned a wheel with the completed bodywork fitted. As such Bedford could really be considered as not much more than an extended test session, in order to iron out as many bugs and clashes as possible!

Conveniently for us, Bedford is only just over an hour away from weCHOOK HQ, so we didn’t have to get up nearly as early as some other teams did! Ian spent the day before the race running a distance greater than a marathon, off road, and in Wales, so I was left to pack the wagon. For the first time, the car travelled to the race on the roof rack, leaving plenty of space in boot for tools and the battery box. I only managed to forget the tyre pump, which is much better than usual when I’m left to pack!

We set off in the morning at 6:30, reaching the circuit at 7:40, giving us a bit of time to set up our garage (that another team moved us back out of when we were in scruiteneering), and prep the car. As a brand new car, 2galoo had to go through a full MOT – after taking nearly an hour to get our original car through, we were a bit concerned that this might start eating into practice, but the staff were quick and effective, meaning we were finished in less than half the time! This left us with nearly the whole hour and a half of the test session to play with.

A side effect of Ian’s mad mileage one Saturday was that he had become somewhat inflexible – so much so that he couldn’t contort himself into the car with the bodywork fitted! So, once he had got in, I finished taping the car up around him and sent him onto the circuit. The car ran for 15 minutes, setting times as consistent as possible considering the volume of traffic out on track, with no catastrophic failures (although a few non-catastrophic ones!). Ian’s main complaint was the lack of left lock, which resulted in him having to brake into the first corner each lap. A quick attack with the power file allowed a couple of extra degrees of steering, although the car was still severely lacking in right lock, which remained a mystery until later in the day. 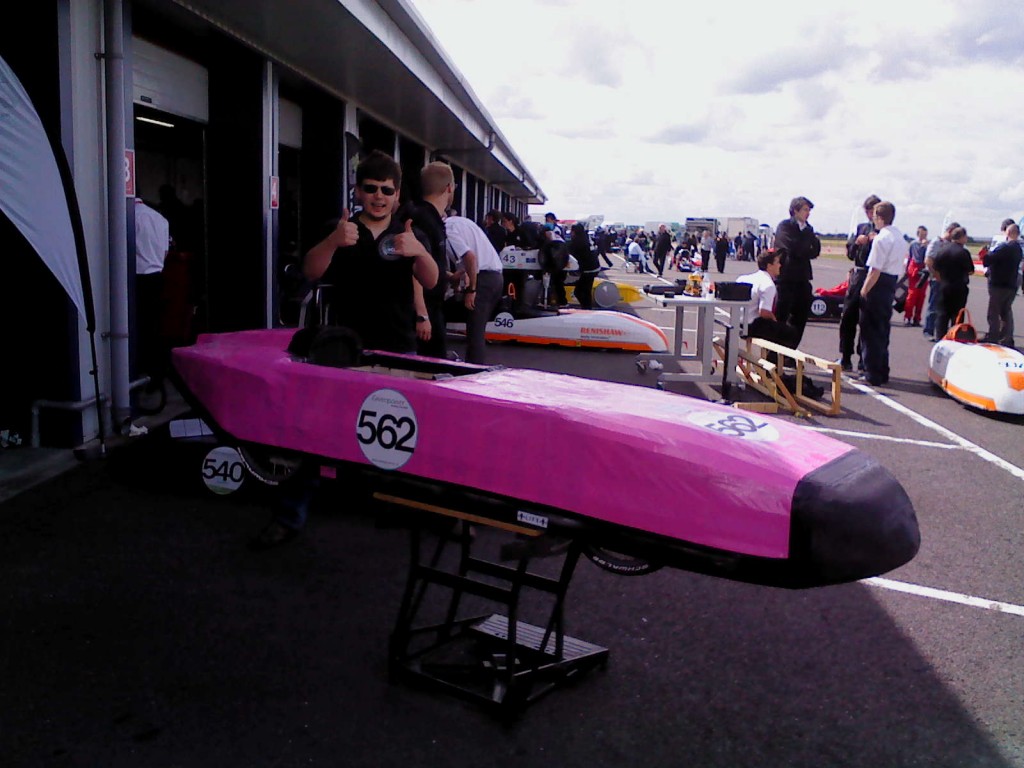 We noticed a few more problems – the tail had slightly debonded from the rest of the chassis, almost certainly caused by the shock loading from the ‘jump’ halfway around the circuit, and the motor had come loose in its bracket, which was a surprise considering how many times it was checked before we sent the car out. Resolving these issues was relatively quick, and we sent the car back out. The changes gave us a 5% improvement in lap time, but we ran out of test time to see how much quicker we could go. Encouragingly, we were much closer to the fastest cars than we had ever been before, even with a car that was still very much in development.

In between practice and the race, we made some more changes – new tyres were put on the front wheels, more dust was created in opening up the steering angle, and a spacer was added to the left front wheel to correct the camber. The final job was getting the car tracked correctly, before taping Ian back in and wheeling him to the line.

An immediate problem emerged, in that the car could barely turn right without the wheel rubbing on something, which hadn’t been a problem in prior testing. There wasn’t time to fix this as we were already on the way out to the grid, and fortunately we would only be going left on the track. 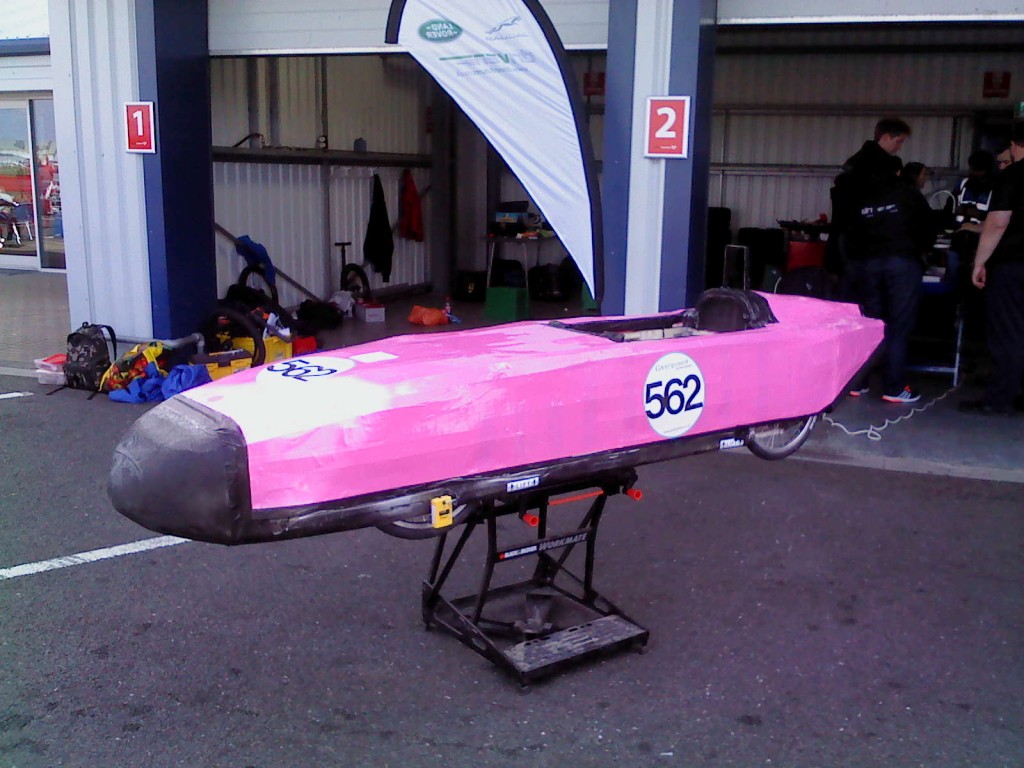 We settled in just behind EMF X1 of EMF Racing, and set very consistent times for the first 30 minutes of the race, but we were nowhere near the speeds we had achieved in practice, even with slightly less traffic on circuit. As we passed the 35 minute mark, with 26 laps completed, Ian felt a change in the car’s handling on the back corner, and immediately bought the car back into the pit lane. With the bodywork off, we immediately noted that the front wheel’s we had developed some severe toe out – one of the front headsets had come unseated, resulting in us dragging the left tyre around the straight bits of the circuit. This had taken the left tyre down to the canvas in places (if Ian hadn’t bought the car in, the tyre would have only lasted a few laps more), on a track layout that should abuse the right tyre much more.

Because of this, we decided to retire from the race – happy that the car had not had any disastrous issues (powertrain, bodywork and electrical systems were all top notch), and confident that we at least had a much more competitive baseline than we did with Electric Boogaloo – the effort was worth it after all! We did go home with a number of jobs to complete before the next race (including a few more that we discovered once back in the workshop), but nothing anywhere near as challenging as completing the car on time in the first place!

Congratulations to Dave on another victory, although we may have had a closer race had Reprobation not suffered from a number of reliability issues, and eventually retired. Great work also from the greenpower staff – scruiteneering was the smoothest I’ve ever seen it, and it wasn’t too chaotic with the density of cars and people in such a cramped pit & paddock area. We also enjoyed espousing the virtues of Electric 2galoo to the two judges from Red Bull, as well as all of the other interested parties that came and had a look – I hope we managed to give at least one person we talked to a bit of inspiration to do their own!